Revised plans to build a housing estate off Bickland Water Road in Falmouth were rejected by a Cornwall Council planning committee this week by 11 votes to 2 with one abstention.

In a report prepared by Cornwall Council’s planning officer, the new submission, which reduced the number of houses from 153 to 94 and included a landscaped corridor to maintain views of Budock Church in the distance, was recommended for approval.

Councillor Grenville Chappel of Falmouth Town Council spoke to object to the development and recommended the revised plans be refused stating: “Budock Church is a significant heritage asset and the impact of the development will affect the setting and change the character of the land and the current views of this iconic grade two star church will be lost.”

Steve Russell, director of Midas Developments said: “Since our previous scheme was dismissed at appeal, we have reviewed the decision and the commentary of the panel inspector and worked closely in our professional team to fully address the previous reasons for refusal.”

Mr Russell added that the revised proposal had addressed the two main issues of concern: “The planning inspector confirmed that the development did not adversely affect the character and appearance of the area when viewed from Bickland Water Road, nor would any development be visible from Budock Water.” 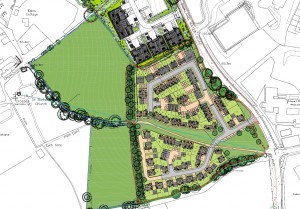 Councillors raised concerns about the road junction at the proposed site believing it to be on a dangerous bend and that schools in the area were nearly full to capacity. There were also concerns about drainage and flooding with a recent photograph of the site known as Bull Field showing it to be waterlogged after the recent rain. In addition, it was raised that the development would cause the loss of greenfield separation between Falmouth and Budock Water village.

In summing up reasons for refusal, a committee spokesman said: “The proposed development by reason of its location and localising effects would result in a highly adverse impact on the rural setting of Budock Church, a grade two star listed building which relies on the protection of its wider rural setting.”